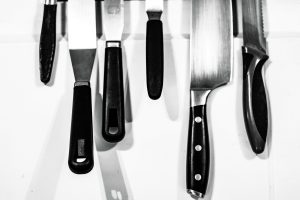 According to Education tomorrow, people nowadays are becoming under thinkers.

There are many reasons why, and one of the biggest reasons is use of technologies.

When the scientist took IQ test data from 1970 to 2009 and compared by years, they found out that people are becoming unintelligent every year.

In the book “The word is murder” by Anthony Horowitz, there is a character called Cornwallis, working as an undertaker. He represents how short tempered/ underthinker people became these days. When he was young, he wanted to be an actor, but his family wanted him to be an undertaker, because his father was. This isn’t fair since people should have right on what jobs to take, but since undertaker is well known for family business (meaning the job will be passed from the parents to their children.)

As Cornwallis said on page 344-355, This character dreamed to be an actor, not undertaker. But he was framed by his rival, and therefore he wasn’t able to become an actor. Instead, he became an undertaker. As you can imagine, he got really frustrated and plans a revenge on that rival he hates, and success to revenge on the rival many years later. This book is all about his revenge and how the main character solves the problem. But by how author wrote about him, I feel like that the author is trying to tell that nowadays, people become short tempered and more of underthinker.

I say so, because he is risking his life on the revenge. You might say he is a deep thinker because he plans all of the revenge and the murder he does to get to the rival, but all of this, he is risking his entire  life. Just living as an undertaker, forgetting about his rival and the past, I would say, is the best way to live he could have chosen. At end of the book (page 256) he gets arrested.

He kept thinking about his rival who he hates all his life, wasting his time. When Cornwallis talked about himself in front of the main character, he used simple words which even elementary schoolers could understand.

The 3rd example of Cornwallis being underthinker is when he committed suicide because he noticed that his plan is over because police found out. On page 355, the main character explained Cornwallis’ face as gleeful and triumphant. Maybe at that moment, he was gleeful and wanted nothing more because he did kill the rival he hated, but if he lived, he could have done many more things. In other words, he wasted the rest of his life.

This might be just me reading too much between lines, but I believe that looking at the character Cornwallis; who spent all his life on one frivolous revenge, this book is about how people became underthinker nowadays with all the kind of useful technologies, warning us how we should care about too much use of technologies.

<Photo by DDP on photo splash>

I was on the way to my job, when I saw a boy in the white shirts. I saw him turning his head around many and many times and his face looked so pale, probably he was lost or something like that. I just felt like talking to him, and so I did. When I tapped him on his shoulder, I realised that his skin is white as paper, paper without anything on it, at the moment I knew that he is wealthy. Wealthy kids has white skin and that’s because they are wealthy enough to not work outside. When I noticed the boy turning his head to me slowly, my shoes were ready to run, and so as my legs. I knew that poor people are not allowed to talk to wealthy people. When we do, wealthy people usually hit us and no one says anything bad about that. It’s just how things work. But this time, the boy started talking to me by himself. I probably looked funny because I was so surprised about that. He asked me how to go to the Maple avenue. That’s where I was heading to… so I told him to follow me and so did he. When we walked all the way to Maple avenue after using some shortcut, our shoes were bit dirty but both of us didn’t care, perhaps it looked like the boy was enjoying it. I asked him his address and escorted him there, little bit expecting his parent to give some money to me for helping their child. But the first look his parent gave me, shocked me so much, because the look the woman gave me was so freezing, I almost thought she weren’t human. Of course the boss at my work sometime give me a cold look when I make mistakes, but I have never seen a look like that. I said good morning ma’am but probably I mumbled because the woman who seems to be the boy’s mother said what with a confusing look on her face and then she said to go away and not to stick to their child. I told the boy’s mother that I helped him because he was lost. Now she understood my but the look she give me didn’t change. I was freezing to death from that look so I just left without saying anything else, and that’s when I thought, probably wealthy people don’t think we are human, instead, they think we are something that gives them calamity.

I was walking to my working space. I realized the big water drops on my face, and my body. I didn’t really care about rain or maybe I should say I was too tired to care about my shirts and all the clothes I had on. As I walked on the lid of long bridge I felt cold, icy, and sharp things on my back. I turned my head around and realised that people were staring at me, but not just staring. They were looking at me like something dirty. I knew I was dirty all over from top of my toe to the top of my head, where the hair divides up, but didn’t expect everyone to look at me. I only used this bridge sometime because the men in black coat stopped me, but somehow today I was able to go. Just didn’t expected those sharp looks, which are stabbing my back. That day, I didn’t work well and my boss got really mad at me. I even felt like he is giving me the same look as people on the bridge gave me, even though I knew that he can be a good person and how much he hate me, he can’t give people a look like that. 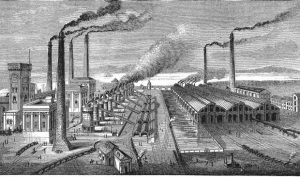 My parents and I, are standing in front of our new house, and the thing about it is that we own the house by ourselves. No one is going to interrupt us from sleeping, and that’s because the owner of our house gave us everything we need to live. Therefor, we got enough foods and place to sleep there, even though we had to work hard all day. While my parents were working, I secretly worked at factory in the town. They paid me enough so I can live by myself but still I stayed with my parents so we could buy house someday.

4 years have passed since the day I started working at the factory where they used new machines to weave, and all the money we saved and hid, so our boss is not going to find out that we are saving money, the amount of them were becoming enough for us to buy our own house. That’s when my parents decided to move out of the place we lived in and buy our new house. Our owner asked so much questions but we kept our mouse shut and at last he gave up, and let us go. We first went to buy the house and we were so excited about it. My mother even greeted to almost everyone on the road because of excitement she can’t hide. People probably thought she was crazy. We went straight to the shop where they sell houses, and bought a best one we could buy, and that’s why family and I are standing in front of my new house, so excited to have a new life.

I made a tool box with long piece of wood.First: I cutted 6 pieces of wood from there and 1 piece of dowel, which will be handle part of tool box.

After sanding all pieces, I glued 12.5 piece together. 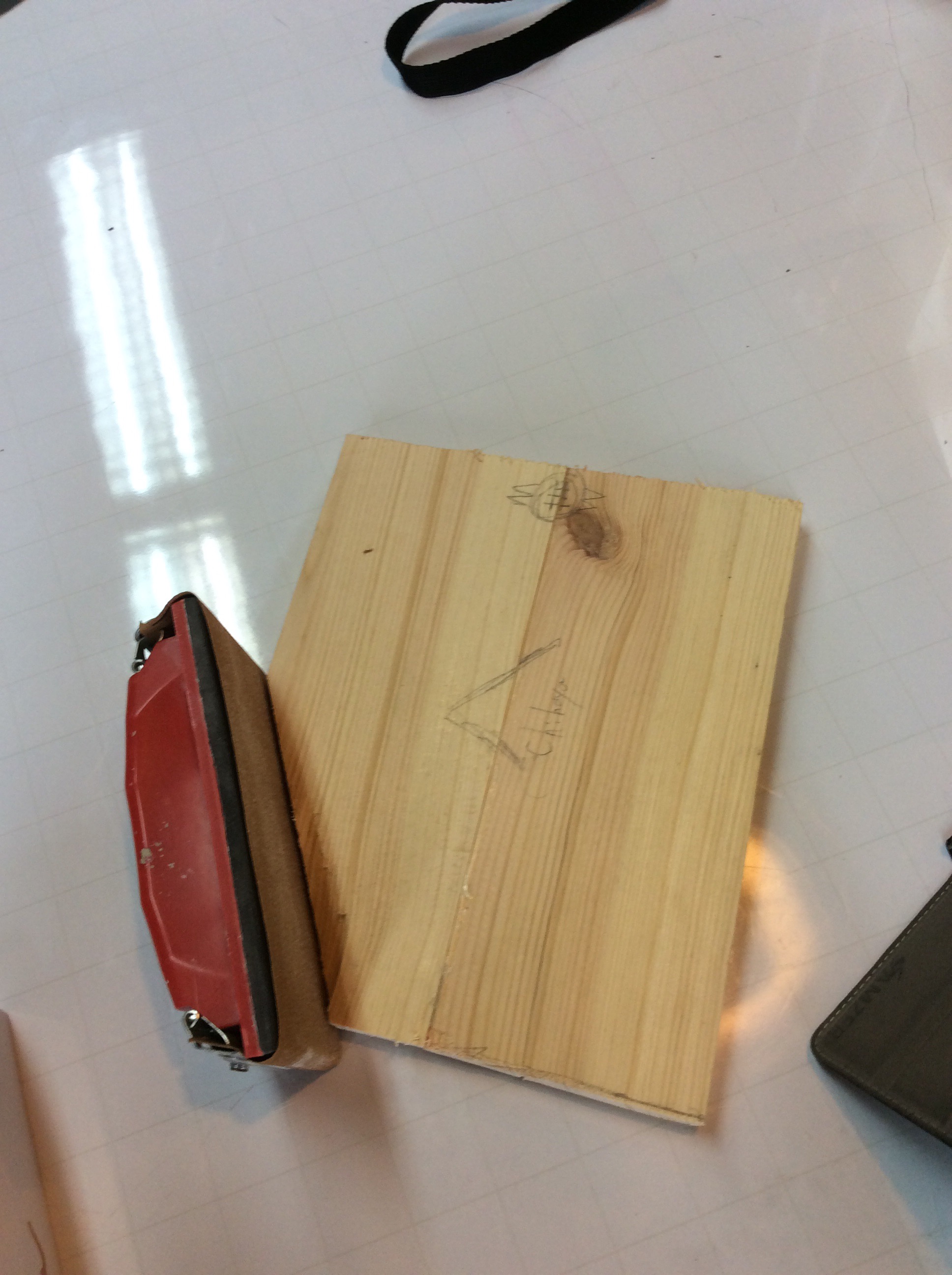 I learned that I need to leave a pieces for at least 1 day or so, after gluing.

After I glued those pieces together, I cutted that piece to made it trapezoid.

After that, I smoothed the surfaces by using a sandpaper, so it will fit in to shape of the toolbox.

I needed to sand more than I thought. 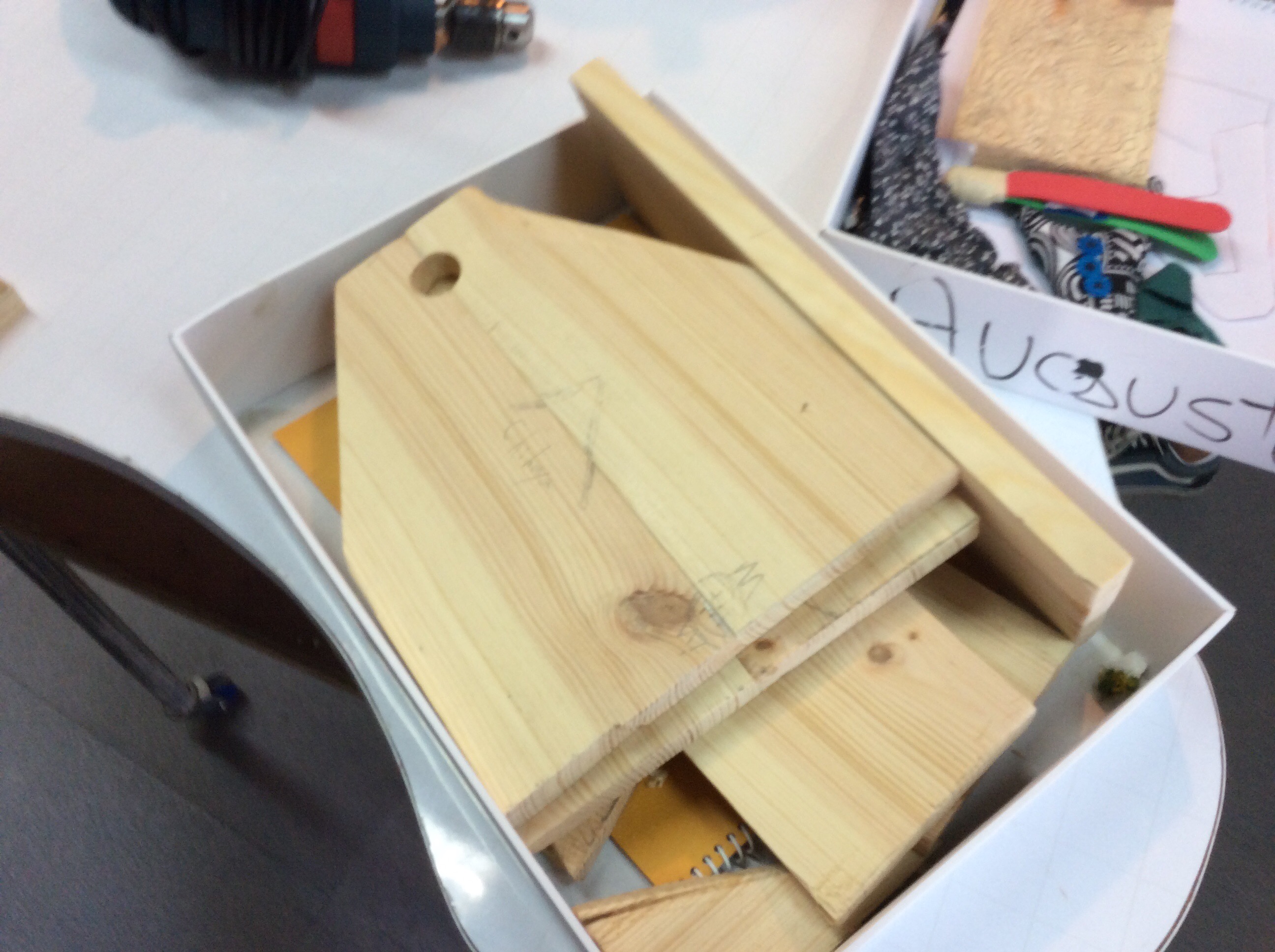 The hardest part was to cut the small piece out of a wooden boards, because almost all of pieces break into half pieces when I add too much force to saw.

After that, I added nail to keep pieces together. 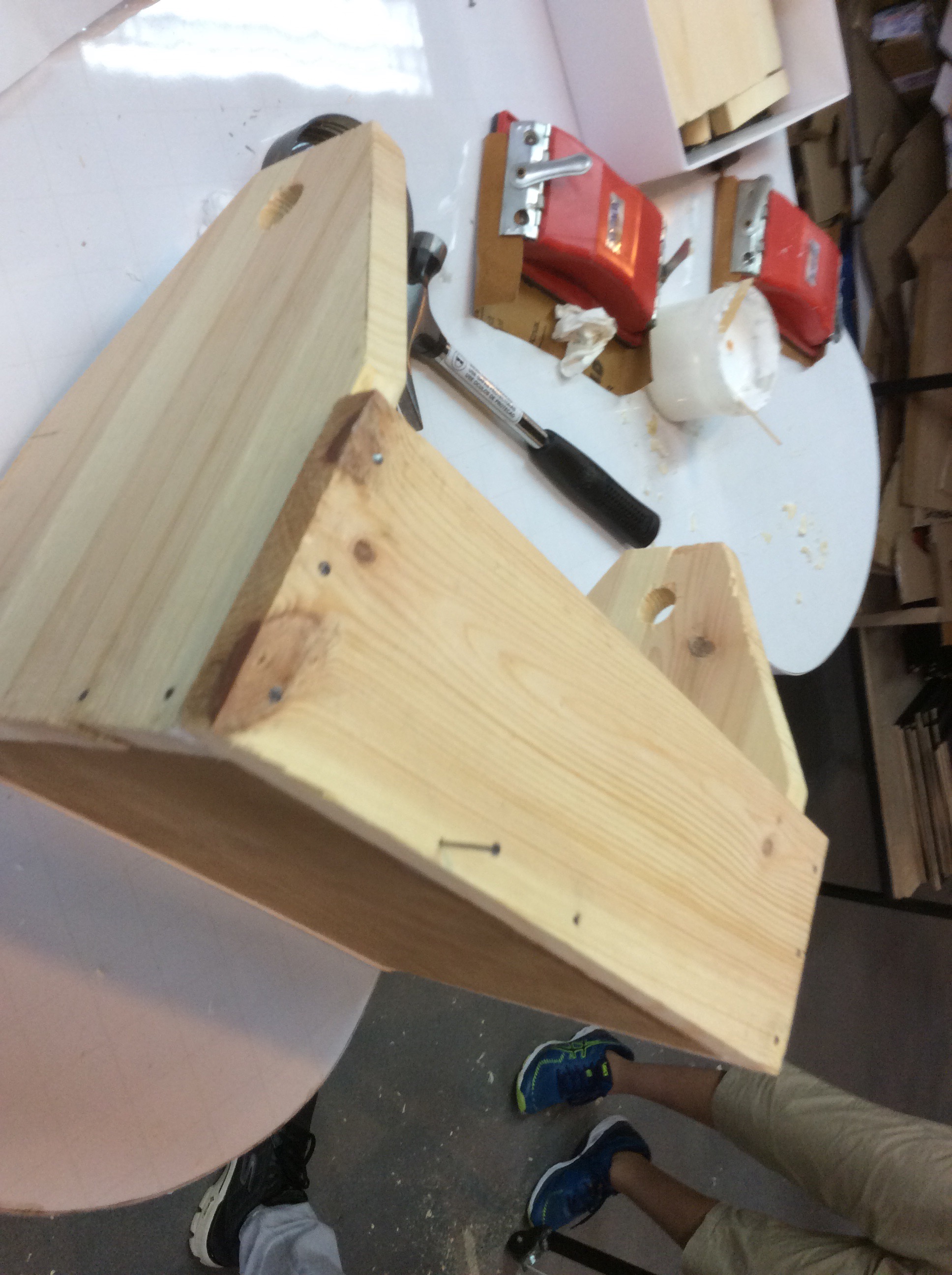 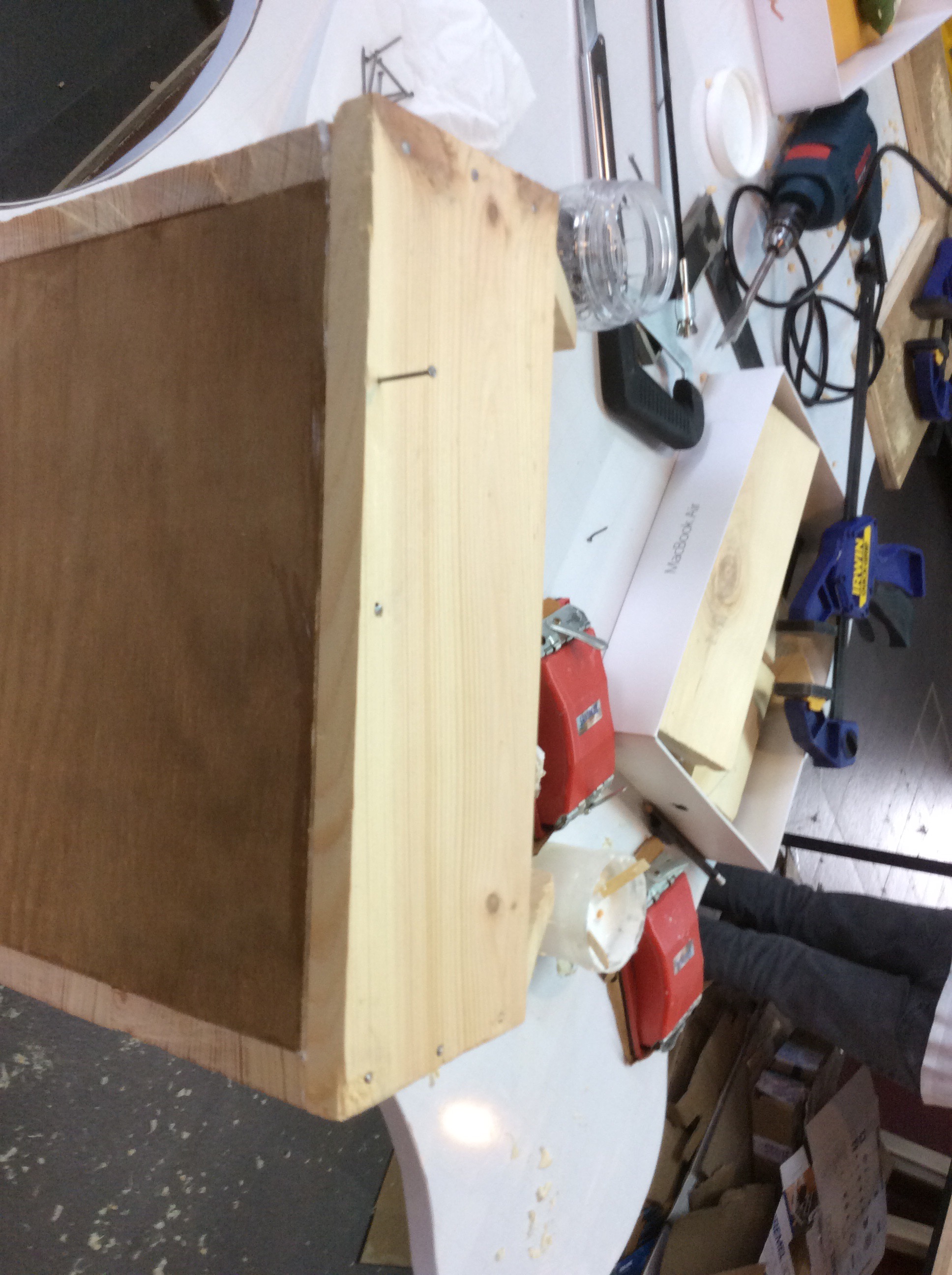 Next time I make the tool box, I will be aware of the nail without head.

This is what me, and Minjae made in Maker space. 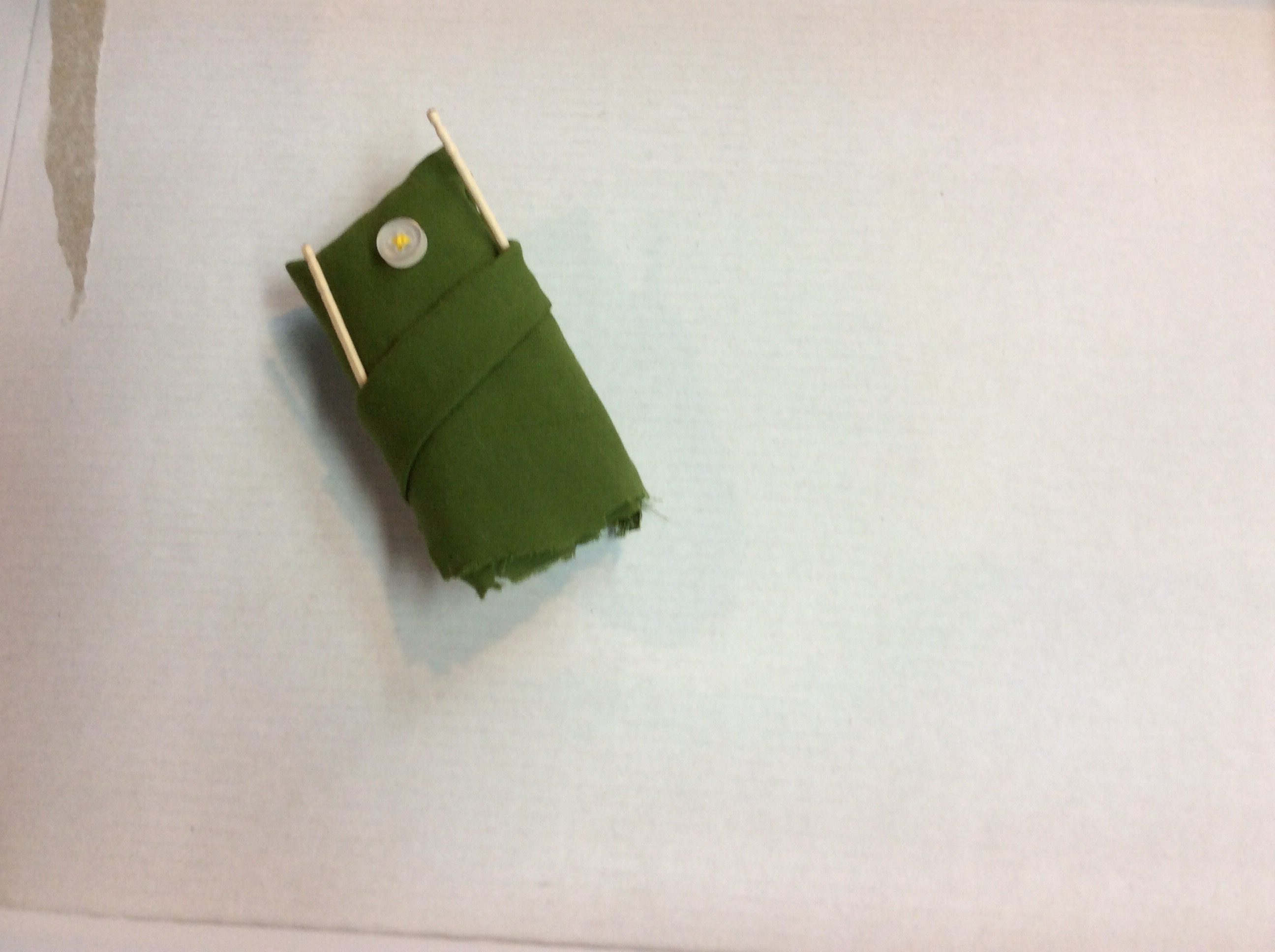